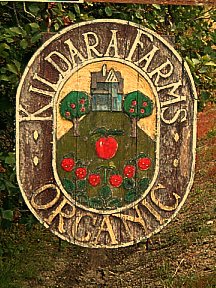 In 1986 commercial realtor Brian Hughes purchased thirty acres of undeveloped scrubland on Chalet Rd in Deep Cove, North Saanich and traded in his Italian loafers for gumboots and his BMW for a reliable Ford pickup truck. He chose the land for the potential he saw in its rich soil, southern exposure and the stunning view of Deep Cove. By January 1987 the farm house was built, and Brian and his wife Daphne moved to the farm from suburban Vancouver with their three small children, Michael (9), Sarah (7) and David (2). The learning curve was steep as the family made the adjustment from city life to farming, with many mistakes being made along the way-- the pale blue wall-to-wall carpeting throughout the newly built house being one of the first. Filthy children, muddy dogs and the occasional renegade chicken soon turned the lovely blue into an off-grey and it has often been mentioned that tile would have been a much better choice. Some of the first things the family tried were strawberries and cattle, the former growing so successfully that Queen Elizabeth herself has eaten them, and the latter spending most of their days breaking out and ending up places they shouldn't  the pristine Deep Cove Chalet lawn, the middle of the road, the patio--they weren't picky. After years of living in pampered city comfort Daphne soon learned there was nothing quite like waking up at 3am to the sound of cattle contentedly munching their way through the patio planters.

Both sons, David and Michael, work on the farm full-time often working long hours for not enough money (or so they say). They love the dependable cycle of tilling, seeding, transplanting and harvesting, although farming's dependency on weather tends to get to them. When they are not outside cursing the weather (too cold, too wet, too dry, too hot etc), they can be found inside glued to the weather network's 7-day forecast. Daughter Sarah runs the weddings and events at the farm and owns the geriatric horses who break out from time to time to cause havoc and mayhem.

Kildara is the true definition of a family farm with six grand children-- Mikayla, Gabrielle, Saul, Ben, Ashton and Tatum all set to earn their pocket money collecting eggs and picking berries this summer, and partners Crystal (Dave) and Brit (Mike) regularly getting called up to help bag salad, hunt for slugs (apparently Dave calls this "date night"--Crystal is one lucky lady!) or seed potatoes! It's an all-hands-on-deck kind of place and they wouldn't have it any other way.  Sunday nights are for large family dinners where Brian regularly tells all the grandkids that "everything came from the farm" and the kids all roll their eyes because they hear it all the time!

Since its beginning, Kildara has been farmed organically but it has been certified by the Island Organic Producers Association since 1994 and has grown every year since. It is now the biggest producer of organic salad greens in BC and Brian is a fundamental part of the organic community throughout the province, volunteering his time and knowledge readily and often in his quest to educate people about the value of farming organically. Salad greens are the biggest part of the operation, with over 300,000 servings of salad greens being produced annually, but the farm also produces 40+ varieties of fruits and vegetables, meat chickens, eggs and pork.